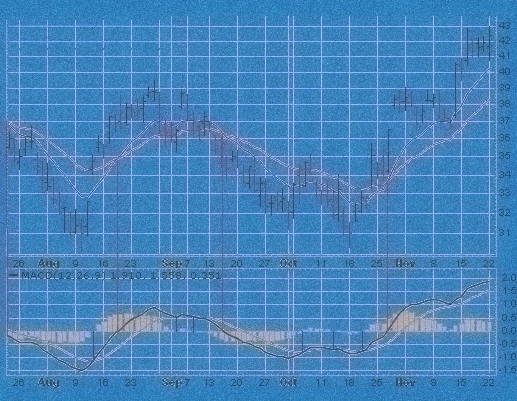 How to Trade the MACD: A High-level Analysis of the MACD Line Feature

Moving Average Convergence Divergence (MACD) is one of the most popular technical indicators used by traders.

It is a flexible indicator that can be used for determining the strength and direction of a trend. It has three distinct features and in this first post we are going to do a high-level analysis of one of those features, the MACD Line.

We will compare three of the most common MACD Line settings on the EUR/USD using daily bars over the past few years to determine whether or not there is a historical pattern that can be exploited.

What is the MACD Line?

Using TRAIDE we can test exactly how favorable and unfavorable the market is when the MACD Line is above and below zero; We will try to find values of the MACD Line that lead to bullish and bearish moves the following day by looking at every trading day between August 1st, 2012 and March 24, 2015.

To create the histogram, we will first select the asset we want to analyze, the timeframe and date range. We then select the MACD Line feature under the MACD indicator group in the middle column of TRAIDE’s Strategy Creation page. We can ignore the “Signal Moving Average Type” and “Signal Period” in the indicator settings because we are not using the MACD Signal feature. 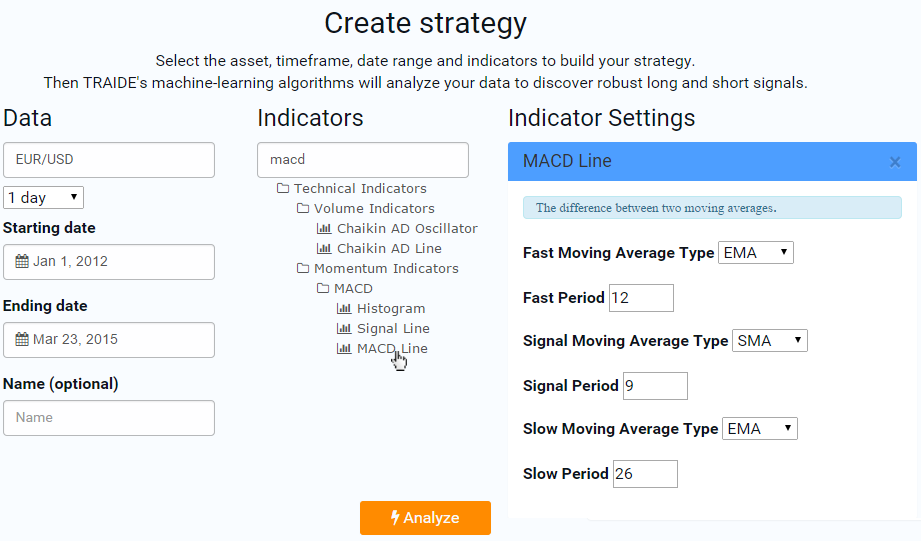 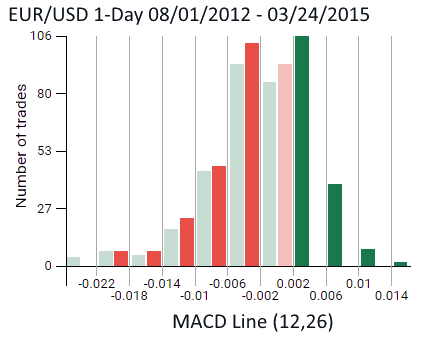 The first step is to remove the ambiguous information. The red and green bars in bin -0.002 (-20 pips) to 0.002 (20 pips) straddle the zero line; we don’t know whether the next day closed up or down since we cannot distinguish between the trades that occurred right around zero.

The next step is to click all of the green bars above 0.002 and all of the red bars below -0.002 and see what the accuracy is in our statistics table for each case. When we select the green bars, we are going long for all positive values of the MACD Line above 0.002 and going short for all negative values below -0.002. We want to see if just this simple rule will lead to over 50% of our trades being correct. 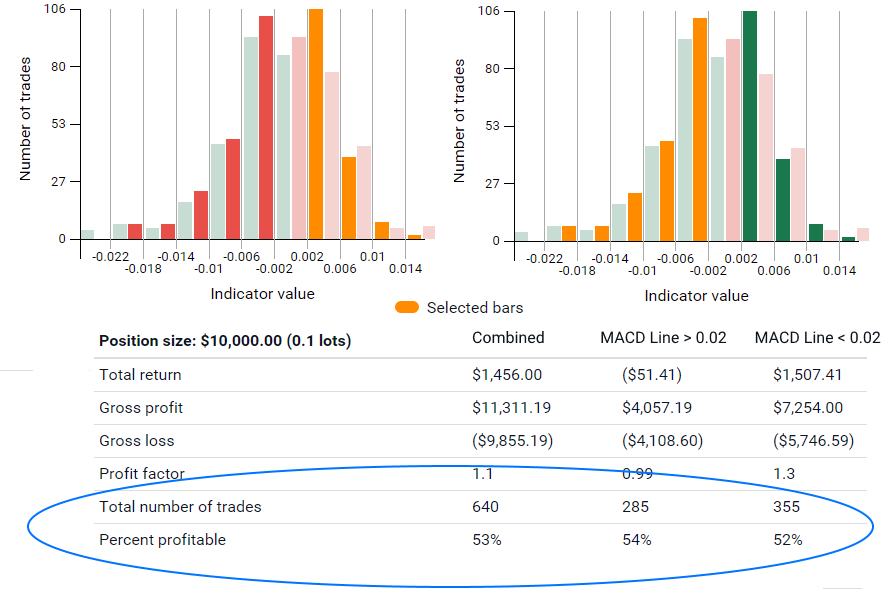 It turns out that our hypothesis is true. There is a historical pattern; when the MACD Line is negative (less than -0.002), the next day is bearish 52% of the time and presents an unfavorable condition to go long. When the MACD Line is positive (greater than 0.002), the next day is bullish 54% of the time, presenting an unfavorable condition for going short.

Let’s dive in a little bit deeper and see if we can refine our MACD Line values. From the distribution, it looks like the tail ends of the histograms don’t present a clear historical pattern while the histogram bars on either side of the -0.002 to 0.002 bin appear to have a clear pattern. 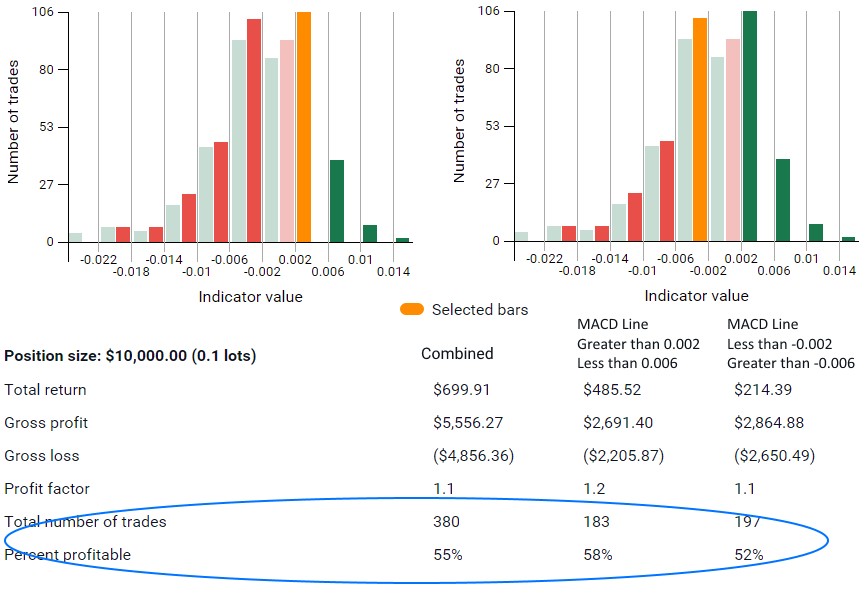 You can use this information to not go long when the MACD Line is between 0.002 and 0.006 or if you are going long, check to see if the MACD Line is within that range. The same goes for going short but with the negative MACD Line values. You could also use this information for the basis of a strategy. Waiting for the MACD Line, with 12- and 26-period EMAs, to be between 0.002 and 0.006 would be a good first filter for going long. I would recommend adding a couple other indicators that you like using. Let’s take a look at the other commonly used settings.

Changing the defaults to use 19- and 39-period EMAs in TRAIDE: 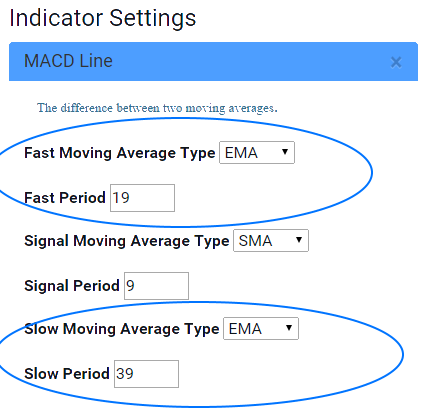 Once I hit analyze, the distribution will load on the Dashboard: 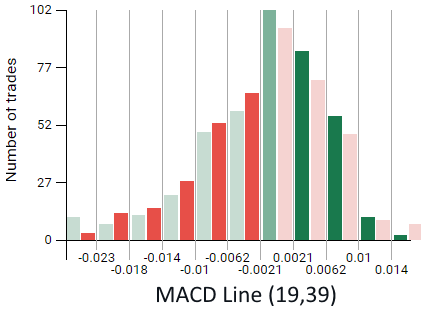 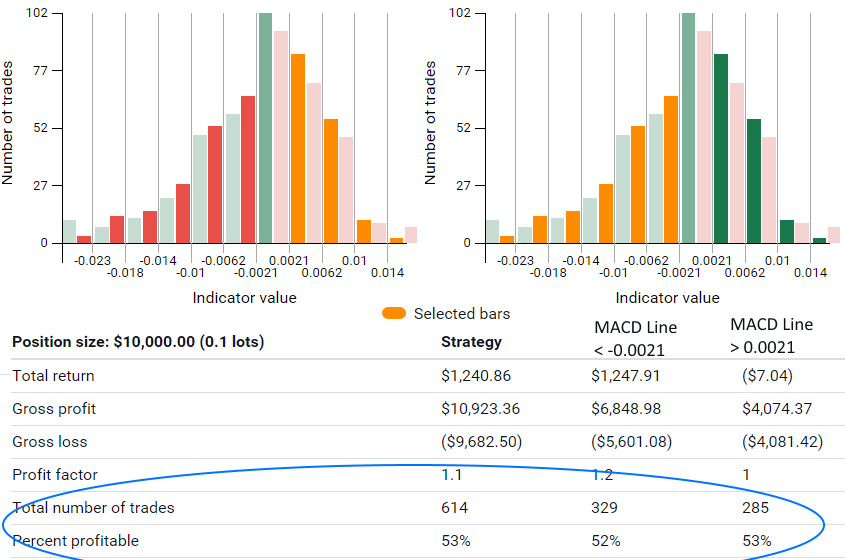 Looking at the histogram, there appears to be a very similar pattern to our 12- and 26-period settings so let’s take a look and see if we can refine the MACD Line values. 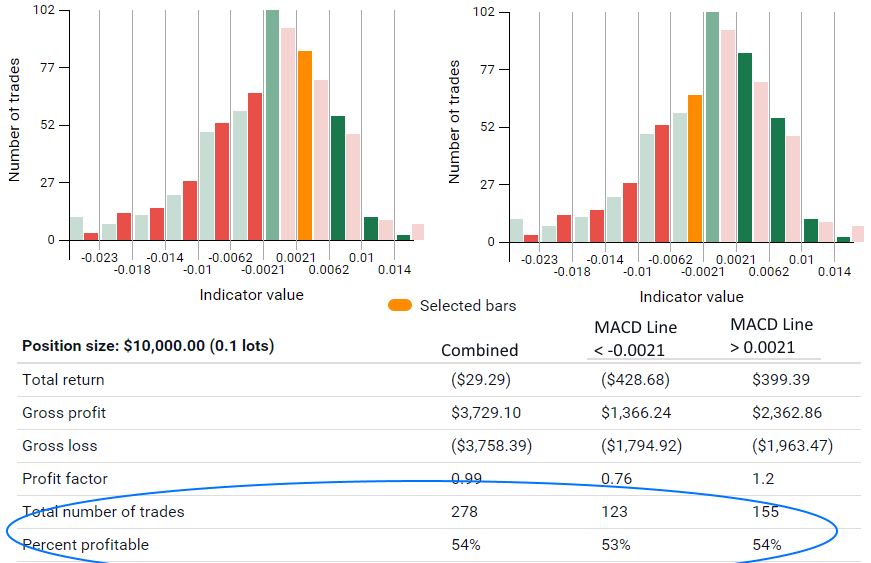 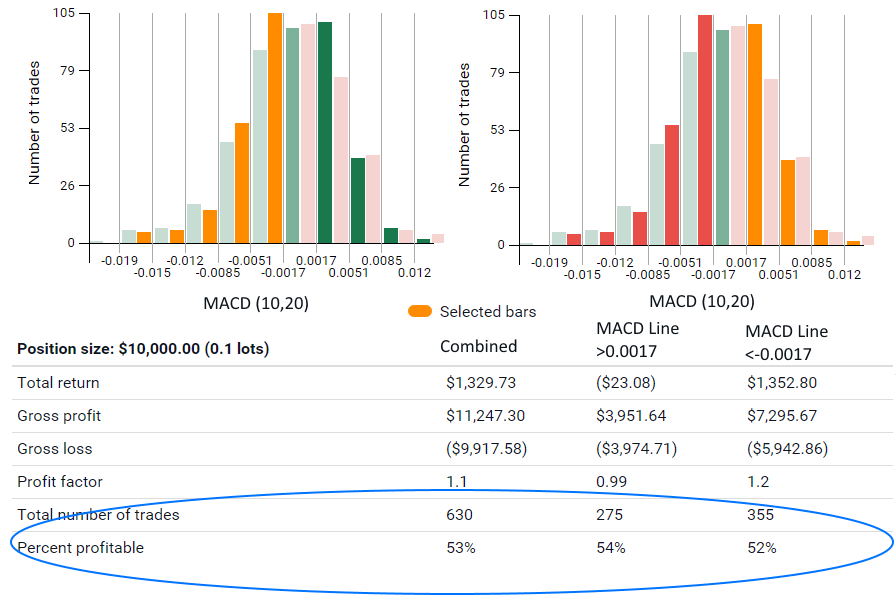 Applying the same process as the other two MACD Line parameters, we will see if the values that are just positive and just negative lead to a stronger historical pattern. 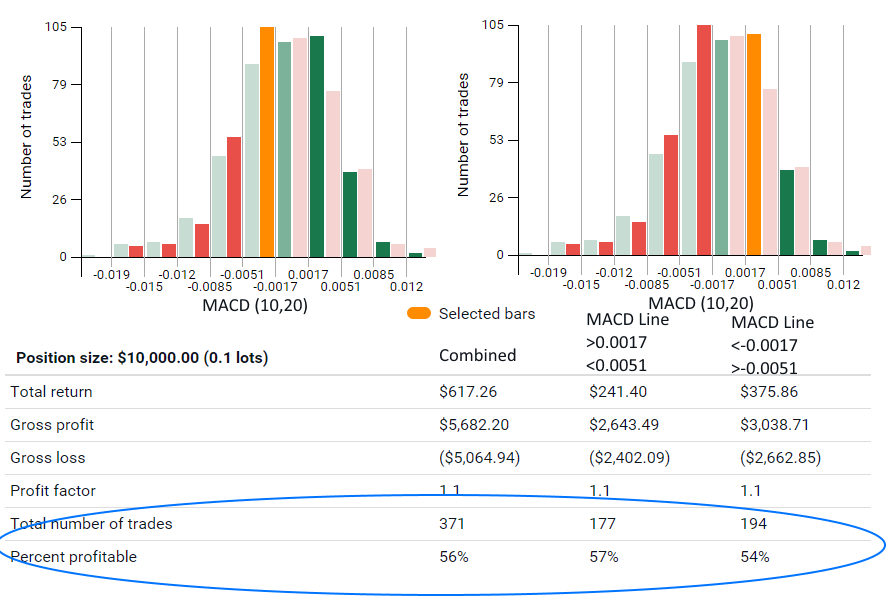 The MACD Line, using commonly used settings, is a reliable feature of the MACD indicator for determining whether or not it is favorable to go long or short on the EUR/USD using 1-day bars. I would suggest combining this feature with other indicators, using the MACD Line as a filter, or using it to confirm your trading decision. If you are applying this to other currency pairs or timeframes, make sure you study the MACD Line over those charts. Difference pairs and timeframes are going to behave in their own way.

A table of our results with the percent correct with each of the indicator settings:

We can also conclude that the different period settings that we tested do not have a significant impact on whether or not the MACD Line can be used to determine whether or not the market is favorable or unfavorable for going long or short. What did have a significant impact was removing the tail ends of our histograms. Instead, when the MACD Line was just positive or just negative, our accuracy went of significantly for both long and short.

For all three indicator settings, it was better when we refined our parameters by selecting the bins where the MACD Line was just positive or just negative:

A table of our results with the percent correct with each of the indicator settings:

It appears that the shorter EMAs, 10 and 20-period, returned the highest accuracy.

This high-level analysis on the empirical data of the EUR/USD using 1-day bars provides a good starting point for incorporating the MACD into your trading. The MACD Line is a reliable feature of the MACD indicator where we can find clear historical patterns.

You can generate these histograms in TRAIDE for any major currency on 1-hour, 4-hour, 6-hour, or 1-day bars since January 1st, 2012.