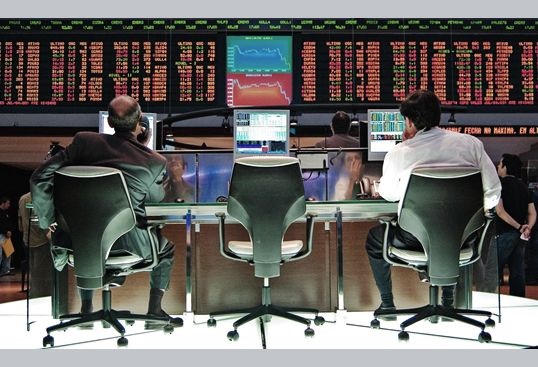 What’s Yuan to Do? Understanding and Capitalizing on the Crisis in China

As the world markets were rocked by China’s devaluation of their currency, many investors were caught off guard.

Questions about what happened and why turned into uncertainty about its long term ramifications and, ultimately, how losses could be recouped after the U.S. markets had its worst month since 2012.

In this article we’ll go over everything you need to know about the yuan, what we can expect moving forward and, most importantly, how you can use this information to your advantage.

[Quick note: China’s currency is officially called the Renminbi, which literally translates to People’s Currency. The yuan is a single unit of the Renminbi, similar to the dollar, allowing us to refer to it as the Chinese Yuan, or yuan for short.]

Everyday the People’s Bank of China (PBOC) sets a “daily reference rate” that keeps the price of the yuan tied to the U.S. dollar. So as the dollar increases in price, so does the yuan.

Then on Monday, August 11th the PBOC set the daily reference rate for the yuan 1.86% lower than it was the day before. This effectively decreased the value of the currency in the world’s second largest economy by almost 2% overnight, a huge move!

This is the first time that China has significantly detached their currency from the dollar, making it more of a floating exchange rate whose prices are driven by market forces rather than tied to the price of another currency. Now instead of looking at the price of the U.S. dollar to set the price of the yuan, the PBOC will be more market-driven.

Why Did They Do It?

Reading the mind of the PBOC is no easy task but there are two major reasons that can give us insight into what led to this decision:

1. A Much Needed Boost to the Economy

One of the downsides to China’s new era of transparency is….well….needing to be transparent. The latest numbers coming out of China haven’t been stellar, worrying many international investors. With the dollar up 21% against other global currencies since last spring, it is dragging the yuan up along with it; leading to Chinese exports being down over 8% in July compared to last year (a stronger currency means that exports are more expensive, giving a leg up to rival Asian exporters, but more on this later).

Along with exports, the manufacturing numbers published by the newly transparent Chinese government are scaring a lot of foreign investors who are getting their first peek behind the curtain.

China is desperate to give its economy a boost and devaluing the yuan could, theoretically, do just that.

As China looks to become a larger player on the international stage, a big step forward is becoming a part of the IMF’s Special Drawing Rights, or SDRs. The SDRs are a basket of currencies that are effectively the IMF’s internal currency (known as the XDR) that is used to supplement the foreign exchange reserves of member countries. Currently the basket includes the Dollar, Japanese Yen, Euro, and British Pound.

With the next draw occurring September 2016, China is positioning itself to be included. In order to do this, they need to prove that the yuan is truly a free floating currency. Inclusion into the Special Drawing Rights would be an acknowledgement that the yuan is indeed a global currency.

What Does this Mean Moving Forward?

The full ramifications of this move are still yet to be seen but there are a few things we do know: 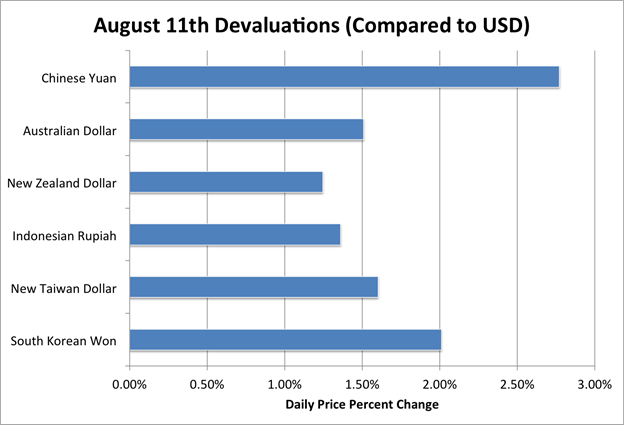 What is good for Chinese exports is usually not so great for its trade partners, namely the U.S., Europe, and Australia, as we saw the the world markets tremble with the devaluation, including the Dow Jones Industrial Average falling 212 points in a single day.

A weaker yuan makes U.S. goods more expensive in foreign markets, leading to many U.S. lawmakers calling out the PBOC for currency manipulation and a testy upcoming meeting between President Obama and Chinese President, Xi Jinping.

China devaluing the yuan has a direct effect on other large exporters in the region competing with China for global trade. Countries like South Korea, Taiwan, and Indonesia all saw their currencies devalue significantly (this race to the bottom is usually what economists mean by a Currency War and it is generally seen as bad news for everyone involved) and we may see further decreases as they look to further boost exports.

The markets have since rebounded with the help of the PBOC getting involved and investors gaining confidence from other strong metrics like the U.S. GDP numbers, but we’ve seen how large of an effect the yuan has on the global markets.

The other side of the coin (pun intended) with devaluing your currency is that imports suddenly become more expensive. Countries importing raw materials into China, like Australia who attribute 2.4% of their economy directly to exports into China, were hit the hardest. With the Aussie already being battered by low commodity prices, a lower yuan means that Australian mining companies will continue to see larger loses.

China’s slow growth has also pushed down oil prices, with the recent numbers not helping. While oil prices had had their largest rally due in part to OPEC’s latest letter on increasing prices, China is set to pass the U.S. as the world’s largest oil importer this year. Continued low prices will help but if the growth in manufacturing cannot offset the relatively more expensive oil imports, there could be large ramifications.

China Making a Move to the Global Scene

As we saw with their desire to be included the IMF’s SDRs, China is looking to become a larger player on the international stage. By de-pegging their currency from the dollar, they are letting the market forces play a larger role in determining the price of their currency (though don’t think that the PBOC will sit ideally by, this also opens the door for more interventions despite their claims this is a one-off fix).

How Can You Capitalize on This?

As market dynamics shift with China trying to find its place in the world economy, there are still many unknowns. Luckily with great uncertainty comes great opportunity:

Now that FXCM, among other brokers, is offering the yuan, you can trade it directly (or at least the offshore rate). Many economists believe that the yuan is still over valued and this isn’t the first step down we are going to see. While there are sure to be pullbacks, if you’re in it for the next couple months (especially if the rumblings about the interest rate hike get louder) you should see a nice bullish trend in the USD/CNH.

Volatility in the NZD and AUD

These shocks to the Australian and New Zealand markets haven’t quite been figured out yet which means that we are sure to see some volatility on the intraday time frames. Look to either take advantage of these breakouts or follow a mean-reversion strategy with a strong bias towards the currencies to continue to weaken.

While the yuan devaluation does represent a net negative for the U.S. economy and could decrease the chance of an interest rate hike this year, the situation in Europe and other foreign markets remains much more precarious. Look for the USD to strengthen against currencies with the largest exposure to China.

While these large moves in the market are very hard, if possible, to predict, once they do occur there is always an opportunity to capitalize. Following a pre-defined trading plan on what to do in certain scenarios is a great way to quickly take advantage of them and not let your emotions take control.

With TRAIDE, you can take it one step further and use machine-learning algorithms to help come up with your next strategy. Select the volatility or momentum indicators you use to trade, let the algorithms analyze them for you, and then use the patterns they find to decide what to do next.

Get your strategy ready for the inevitable shock wave in global currency markets.